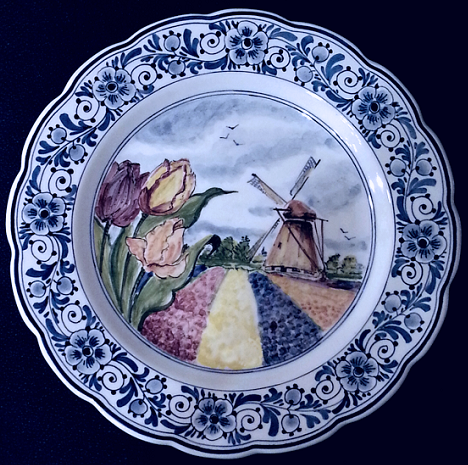 THE ORIGIN OF DELFTWARE

Delftware is glazed earthenware that was produced for the first time at the beginning of the 17th century in Delft, The Netherlands. The inspiration for the decorative patterns was taken from Chinese porcelain, which was imported to The Netherlands via VOC ships and trade routes. The mentioning of “Delft” on the bottom of the product is not necessarily a warranty for the authenticity and hand-painted nature of the object. The name “Delft” has no copyright as such, and can thus also be found on mass-produced souvenirs. However, De Blauwe Tulp manufactures all of her produce entirely in a traditional manner.

In the 17th and 18th century it was custom to mark every product from a Delftware workshop, for instance with symbols such as an axe, a rose, three clocks, or the initials of the proprietor of the workshop. In so doing, one could recognise the authenticity of Delftware from Delft.

In 1695 more than thirty potteries were located in Delft. However, at this moment in time only a few Delftware workshops remain, of which De Blauwe Tulp is one of the workshops that still manufactures its products entirely by hand.